On 7 February 2006, the Preservation of Monuments Board announced that it would turn the factory into a national monument on the 64th anniversary of the British surrender to the Japanese.

Food started to grow scarce, as the Japanese were piling in all the money from Singapore into their own war machine, instead of looking after the "Light of the South". People were thus forced to grow their own crops to survive. A black market started to grow extensively due to the lack of food and resources. The things sold at the black market were heavily overpriced, but it was the only way to get one's hands on theses precious food, other than depending on the little rations available.


The Japanese introduced Banana Money as a new currency. However, the Japanese kept printing money without limits, making the banana money a worthless currency. This devastated the economy of Singapore, and caused even greater hardship for the people living in Singapore. 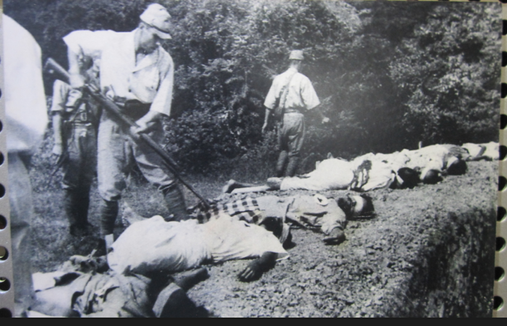 I saw pictures, documentaries, and true accounts of what happened in the Japanese Purification Programme (Sook Ching). The Japanese attempted to clear off anti-Japanese sentiments by disposing of the Chinese, who were supporters of mainland China. At that time, mainland China was also at war with Japan. Eurasians, seen as related to the British, were also persecuted, but to a less extent than the Chinese.

It was only after visiting the exhibit that I saw how truly corrupt the Japanese were. At the screening centres (for Sook Ching), the Kempeitai (Japanese secret police) hired civilians as informers. These "informers" could simply point out anyone they believed was a anti-Japanese. These informers sometimes singled out those that they disliked, thus creating a thick atmosphere of suspicion.


The people suspected of being anti-Japanese were sent to beaches or jungles to be killed. For the first time, I realised and felt the people's fear and horror during these dark days. So many testimonies on these brutal acts has made me appreciate what Singapore is today. 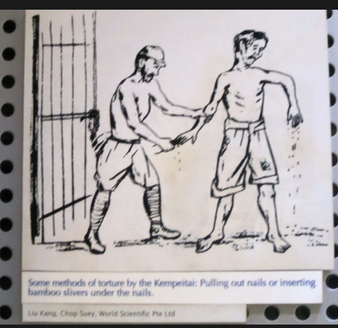 The role of the Kempeitai did not just consist of enforcing military discipline. It was also a military police force handling intelligence-gathering and civilian police duties. Along with the army, it was responsible for discipline of the troops, and more importantly, mopping up anti-Japanese elements in the Japanese-occupied territories.

To understand why people feared the Kempeitai, one just needs to look at the Kempeitai training school. The Kempei (military policemen) were trained to conduct espionage, use explosives and arms, break codes, commit burglaries, run spy networks, and carry out other subversive activities. Imagine policemen learning all of these skills! Obviously, the Kempeitai were going to spy on people, and snatch them away when they least expected it.
And so they did. The Kempeitai did not require evidence that one was anti-Japanese to arrest him--mere hearsay was sufficient. People were taken away unexpectedly and secretly, with the Kempei breaking into their houses, catching them early in the morning. Once taken away, suspects were tortured for information or confessions. The picture shows some of the torturing methods the Kempeitai utilised. 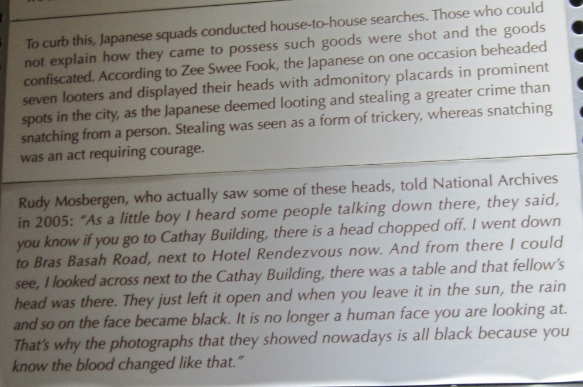 When the Japanese came, they searched through every house. This search, however, was actually a looting operation, with the soldiers taking everything they saw. One survivor of the Japanese Occupation said that even when a soldier had 2 watches already, one on the left hand and the other on the right hand, he still took another watch, and kept it.

Looting by citizens, however, was unacceptable. Those caught looting would be beheaded, and their heads would be displayed for all to see. People attempted to loot because food was scarce. One factor that contributed to the food scarcity was the fact that the Japanese were pouring in all the resources from Syonan-to into their own war efforts. 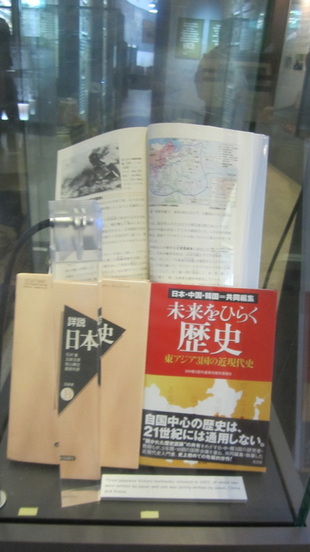 The Japanese wanted the locals to adopt their culture, to acquire Nippon seishin (Japanese Spirit). To have the Japanese Spirit was to accept the sovereignty of the Japanese emperor, and to swear one's undying loyalty to the Emperor. To accomplish this, the Japanese encouraged the locals to learn Japanese (Nippon go). The Syonan Times and the Syonan Radio broadcasted lessons to the locals. To teach the young more about Japanese culture and spirit, a Japanese language magazine, Sakura, was distributed to students.
Incentives were given to those who learnt the Japanese language. For example, Malay clerks who were not conversant in Nippon-go lost their civil servant jobs to those who were literate in the language. Those who already knew Japanese could capitalise on this and become a teacher or a interpreter.

Their bravery and wit, even in those dangerous times, encourages and inspires me to bravely forge on every time I face any challenges or difficulties. 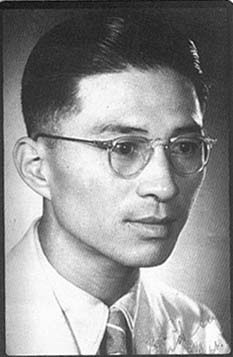 Some brave civilians resisted the Japanese rule.
Lim Bo Seng
Lim Bo Seng was part of Force 136 during the Japanese occupation. He took part in Operation Gustavus, which aimed to establish an espionage network in Malaya and Singapore to gather intelligence about Japanese activities, aiding the British in their mission, Operation Zipper, to recapture their colonies. This failed, because a captured communist guerrilla revealed the Allied spy network operating on Pangkor Island. The Japanese then launched a counter espionage operation, and by late March the Japanese had more than 200 soldiers on the island. Then on March 24, the Kempeitai arrested a fisherman, Chua Koon Eng. The Kempeitai interrogated him and Chua told them what he knew about Force 136. Apparently, Li Han-kwang asked to use his boat for the Force's operation. Li was arrested and, under torture, affirmed Chua's statement. The entire spy network was thus destroyed by 31 March 1944.
The next day, Lim Bo Seng was captured by the Kempeitai. He was tortured horribly but did not reveal any information about Force 136. He even protested against the ill treatment shown to his comrades in prison. In the end, Lim Bo Seng fell ill with dysentery, and was bedridden by the end of May 1994. He died in the early hour of June 29, 1994.

Lim Bo Seng's bravery and courage teaches us all a lesson on being true to one's belief, so much that he would rather experience pain than betray his force. The first time I read about him was in a Chinese textbook, and this is a reminder for me to hold on and pursue my beliefs, no matter how harsh the situation is!

The Japanese occupation taught me the horrible consequences of war. I realise that to live a peaceful life is a blessing, and the right thing to do. Often we as human beings fight about petty little things in life. But when petty fights escalate, they can become serious and cause a great aftermath. I learnt that it is better to avoid disputes than to fight at every little thing
The war also made me appreciate who I am and what I have today. The people living in the oppressive environment had so little, yet they did their best to help each other out, with some even resisting the Japanese! We, living in this prosperous era, have really no right to complain.

From this we can also see the importance of our defence system, and National Service. The British did not put up a strong defence, because they saw Singapore as merely one of their own colonies, not their own soil. Only those who see Singapore as their motherland and home will be able to safeguard Singapore to the end. Hence, National Service, which aims to prepare every Singaporean male for war, is a good way to defend our country.

As an individual, I can help to defend my country by wholeheartedly participating in National Service. It may be tough, but in the end it is for the greater good of the country.